Is no match for the storm inside!

Innocent Meredith Ingles is mortified when she knocks her temporary boss off his feet with a Christmas tree! Giovanni Cannavaro’s trusting her to make his opulent train’s maiden voyage a roaring success. But resisting the man himself is a challenge all its own!

Working alongside Merry makes Giovanni feel alive. He knows acting on their combustible chemistry could burn them both. Following the loss of his first love, he swore he wouldn’t risk pain like that again. But could Merry be the gift he didn’t know he needed? 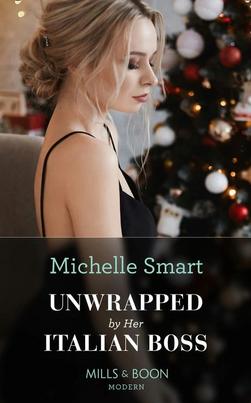 MERRY INGLES STOMPED her way through the freshly laid snow from her chalet, tugging her woolly hat over the cold lobes of her ears as she went. The thick clouds that had obscured the stars overnight had cleared, leaving the skies above the Swiss Alps crisp and blue and with a sharp chill that fogged the breath. Further up the mountain, the Hotel Haensli rose like a beautiful majestic overlord peering down on its minions. In three years of working and living there, Merry had never lost the awe of her daily morning glimpse.

Ten minutes after setting out, and looking forward to the hot chocolate that would warm her frozen cheeks, she spotted a porter wrestling a huge netted Christmas tree that would be added to the twenty-four ornately decorated trees already placed throughout the hotel’s ground floor.

‘Want a hand?’ she called, upping her pace.

Johann, one of the groundsmen who’d been tasked with chopping the huge Nordmann Firs the hotel grew specially for the festive period, put the base of the tree down and waited for her to catch up, a relieved smile on his face.

‘You are a lifesaver,’ he said. ‘I need to get this to the spa lounge before it opens to the guests. Ricardo was supposed to help me.’

Up close, Merry’s practised eye estimated the tree to be a good fifteen foot. Her nose wrinkled as she contemplated it.

They agreed that Johann would lead the way and in unison lifted the tree onto their shoulders. It was much lighter than she’d expected but the foot in height difference between them meant it slanted at a steep angle. Although her gloves prevented the stray pine needles poking through the netting from scratching her hands, to keep it stable she pressed her cheek to it and tried to ignore the scratching against her cheek and spectacles.

More through blind luck—and blind really was the operative word as Merry’s hat sloped down and dislodged her glasses and she couldn’t see anything past a blurry Johann—they manoeuvred the tree through the double doors of the staff entrance at the rear. Pausing to stamp snow off their boots and readjust their load, they then navigated their way down the long, wide corridor running the other side of the hotel’s huge reception. By the time they reached the double doors that led into the spa, Merry’s glasses had fallen down her nose again and were in danger of falling off her face.

‘Hold on a sec,’ she said, resting the base of the tree down. Hugging it tightly with one arm, she shoved her glasses back up with her free hand and tugged the zip of her snow jacket down a little. Wrapped up as she was, the hotel’s warmth was stifling. Not wanting pine needles stuck in her hair, she kept her hat on.

They lifted it back onto their shoulders. Johann opened the door. As he did, he twisted his body, forcing Merry to twist too, to keep the tree stable. She had no idea anyone was behind her until she felt a thud followed by a gasp of pain.

‘Sugar! I’m sorry!’ Setting the tree’s base back on the floor, she turned to apologise to her victim, praying it was a member of staff she’d just accidentally bashed.

The tall man in an obviously bespoke navy-blue suit, handsome face wincing in pain as he rubbed his shoulder, was most definitely not staff.

‘I’m so sorry,’ she said, mortified at what she’d done. ‘Are you badly hurt?’

Repeating herself in German, she braced herself. There would be hell to pay for this. Only the super-rich and powerful could afford to stay at Hotel Haensli, and in exchange for the astronomical sums they paid for the privilege of staying in such a luxurious setting with some of the best views in the whole of Switzerland, they expected exemplary service. They did not expect to be clouted by a Christmas tree.

Giovanni Cannavaro stared at the horrified bright red face half hidden by a thick scarf, glasses askew and topped with the most ridiculous hat he’d ever seen worn by an adult. His flare of anger at being hit by a hated Christmas tree dissolved as he found himself smothering an extremely rare and extremely unexpected bubble of mirth.

It was also an extremely short bubble of mirth.

He stepped towards the woman. ‘Move.’

‘You hit me and now you tell me what I can do?’

What he could see of the tiny woman’s red face instinctively recoiled in alarm at his words.

He pointed with his thumb to where the front of the tree was trapped in the door.

‘You get the door,’ he said, overriding her protest before nodding at the groundsman he suspected was trying to make himself invisible. ‘I am tall, like him. Is easier. And safer,’ he added pointedly.

She scuttled to open the door and pressed herself tightly against the wall as the two men carried it past her.

‘All done,’ Giovanni said when they’d placed it in the stand and the netting had been removed. He flicked stray pine needles from his shoulders and nodded at the two hotel employees. ‘Next time, more careful, si?’

Then, in need of food and a cappuccino before he solved the mess that had seen him fly to Switzerland in the early hours, Giovanni strode to the breakfast room.

‘Sorry I’m late,’ Merry said as she hurried into the office she shared with her boss and Sasha, the other member of the hospitality team, only to find the room empty.

While she waited for Katja to come back from wherever she was—her computer was on, so she’d obviously been in—Merry put a hot chocolate pod in the snazzy machine and booted her computer up.

Where the rest of the hotel had been transformed into a Christmas wonderland, their office was devoid of decoration. Mostly. Merry had stuck a small plastic tree filled with tiny baubles on the corner of her desk and wrapped her monitor in tinsel. Katja had rolled her eyes at it, just as she’d rolled them when she’d seen Merry in her red woolly hat that had Rudolph the Red-Nosed Reindeer knitted into it.

She was finishing her hot chocolate and replying to emails when Katja finally hurried through the door, her face creased with worry. ‘There you are. You’re needed in the meeting room. We have a situation.’

Merry jumped to her feet. ‘What kind of situation?’

‘Everything will be explained... What’s wrong with your face? Have you scratched it?’

‘Pine needles. I helped Johann carry a Christmas tree to the spa.’ She felt her scratched cheeks flame again, remembering how she’d accidentally bashed one of their esteemed guests with it. Another roll of dread played in her belly. The guest had taken it relatively well, all things considered, but she’d known staff to be sacked for less, and thought it best not to mention the incident to her boss.

That didn’t stop the image of the guest’s handsome face pinging back into her mind. He truly was gorgeous. Greek god handsome. Hair so dark it was almost black. Long straight nose. Chiselled jaw. And those lashes. Those cheekbones...

‘That’s why I was late. I couldn’t let him struggle on his own,’ she added as they strode down the corridor and she shoved Cheekbones from her mind. With any luck, she’d be able to avoid him for the rest of his stay there.

‘I know,’ Katja said tightly. ‘You like to help people. That’s why I chose you, remember?’

Merry had spent her first two years in Switzerland working as a waitress at Hotel Haensli, thrilled to have landed such a prestigious job in one of the world’s top hotels. A year ago she’d been summoned by the management. Terrified she was about to be fired, she’d almost fallen off her chair when Katja, the Head of Hospitality, announced she was in need of a new assistant and wanted to offer Merry the role. Katja had read through the hotel guest book and online reviews and been impressed at how many times Merry’s name was mentioned in them as someone who went above and beyond her duties. Returning guests often insisted she serve their table.

Overnight, Merry went from split shifts of six a.m. starts and midnight finishes to eight a.m. starts and, unless they had special evening events on, four p.m. finishes for double her waitressing salary. The job even came with its own two-bed chalet. No more sharing staff quarters with fifteen others! A career path had opened up for her and she was delighted to follow it.

The woman who’d made all this happen for her, Katja, hesitated at the staff meeting room door. ‘Just...just think what this could do for your future, okay?’

And with those enigmatic words, Katja opened the door.

Seated at the oval table was Hotel Haensli’s elderly owner, Wolfgang Merkel. The automatic smile of greeting on Merry’s face froze when she saw the man beside him.

It was Cheekbones. The man she’d clobbered with the Christmas tree.

Heat flushed through her body like a wave. White noise filled her ears.

She, Merry, was the situation and she was about to be fired.

The noise in her head was so deafening that when Cheekbones rose from his chair and extended his hand to her, it took an embarrassingly long time for it to penetrate her brain that Katja had introduced him and she’d not heard a word of it.

Tremors raced through her fingers as she reached her hand across the table to her executioner.

Unwrapped by Her Italian Boss

The chemistry between the two is well-written with sparkly romance... There is angst, reconciliation, self-realisation and a lovely romantic conclusion. ​Jane H. Netgalley Review

Unwrapped by Her Italian Boss Playlist 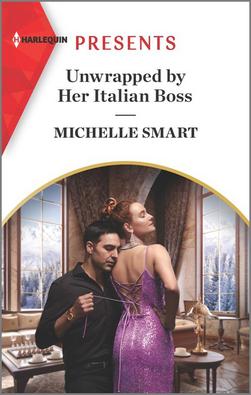