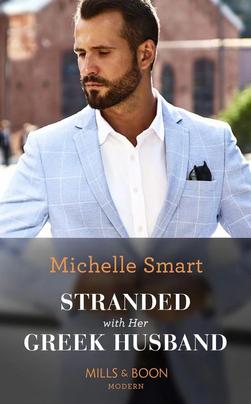 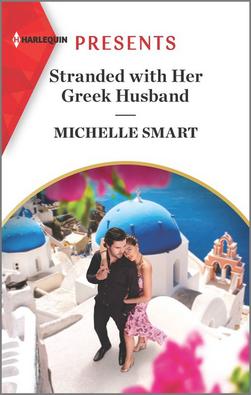 Stranded with Her Greek Husband

All she wants is to run

Until desire stops her in her tracks!

Keren fled the island of Agon heartbroken, convinced her marriage was over. Now she must return to face her gloriously handsome estranged husband, Yannis, and end things for good.

Instead, she finds herself marooned on Agon, and Yannis insists she spends three final days with him first! With nowhere to run from the fierce longing he reawakens, Keren must open her eyes to the whole truth. Not just the tragedy that broke them, but the joy and passion she’s tried—and failed—to forget…

​CHAPTER ONE (opening excerpt)THE CALM AEGEAN WATERS that Keren Burridge was sailing her thirty-four-foot cutter The Sophia through were in complete contrast to the tempest happening beneath her skin. The storm inside her had been growing since the island of Agon appeared on the horizon.

Habit had her release the tiller to grab her sunscreen and smear her face and as much of her body with it as she could reach. She’d suffered sunburn in Bermuda, a painful enough experience for her to ensure she always had a month’s supply of sunscreen on board. In this respect, Keren was a quick learner. She only needed to suffer pain once for her to do anything to stop it afflicting her a second time.

Pain was coming her way today though. It was unavoidable.

A breeze swirled around her and caught the sails. The Sophia responded by increasing its speed. The beats of Keren’s heart increased with it.

Familiar landmarks came into clearer focus. There was Agon’s royal palace. There were the ruins of a once majestic temple dating back three millenia. Landmarks she’d once visited and explored at a time when she’d believed this island would be her home for ever.

The imposing crisp white villa set back in the cove she was steering towards came into clearer focus too. The rising sun danced over it, making it gleam enticingly. Fraudulently.

There was nothing enticing about it. If she could spend the rest of her life never setting eyes on that villa again then she would spend her life content, but choices made in grief were choices you lived with for the rest of your life.

The left side of the cove, a sheer circular wall of rock, had a small, seemingly natural jetty. She recognised the yacht already moored there. It was slightly larger than her cutter and used purely for the purpose of transporting its owner to his superyacht moored in Agon’s main marina.

Once she’d sailed into her mooring space and secured her boat, Keren clipped her mini grab-bag around her waist then carefully snipped the base of the pink lilies she’d been lovingly growing in pots.

Holding the lilies, she stepped barefoot onto the jetty.

The jetty merged onto a pristine white beach as beautiful as any beach her fifteen months as a sea-wanderer had taken her. Fine, warm sand sank between her toes as she treaded through it to the gently inclining pebbled steps that led up to the villa. The closer she got to the steps, the heavier the weight of her legs and the heavier the weight in her chest.

At the top of the steps was a wide metal gate connecting a high wall designed to keep intruders out.

The gate opened automatically for her, just as she knew it would. Every move she’d made since sailing into the cove had been watched by an army of security cameras. The faceless people watching them knew to admit her at any time without question or intrusion. Yannis had kept his word on that score, if nothing else.

The villa’s grounds were vast and immaculately maintained. She followed the path that snaked the swimming pool and entertaining space, refusing to let memories pierce her or slow her pace.

​The peach tree was in a secluded part of the grounds, the only area not under surveillance. It had grown a lot in the almost two years since they’d planted it and was now old enough to bear fruit. The masses of fruit on it were beginning to ripen. Close to the foot of its trunk sat a granite headstone carved in the shape of an angel. The words Sophia Filipidis were engraved into it in English and Greek. It was to the side of this headstone that Keren sank to her knees.

Fresh flowers had recently been placed in the headstone’s vase. She added the lilies to it then bowed her head and whispered a prayer for her daughter’s soul. And then she talked to her. Told her the places she’d been. The people she’d met. The flowers she’d sniffed. The new foods she’d tried. Talking to her here came so naturally even though Sophia experienced everything with her from the wide space in Keren’s heart she occupied.

When she’d finished talking, she looked again at the peach tree. They’d chosen it together. In Chinese culture, the peach tree is considered the tree of life, the peaches a symbol of immortality. Their daughter had never taken a breath of her own but in this tree her memory would live on.

‘I knew you would come today.’

Her bruised heart thumped and she closed her eyes.

Keren hadn’t seen her estranged husband in eighteen months. Their only communications came via their lawyers.

If he’d approached her on any of her other visits here, she would have reminded him of their agreement, reminded him of his promise to let her come here whenever she wanted to mourn in peace and solitude.

Taking a long, deep breath, she got to her feet then turned her face to him.

Startlingly blue eyes met hers. Her heart thumped again. Expanded and rose up her throat.

His broad shoulders rose and fell heavily, a gesture that lanced her chest, and then he stepped forward to stand beside her.

They stood in silence until she felt a flash of warm pressure on her hand, and she stretched her fingers so he could lace his through them and, for that brief moment, unify their grief.

It was the first touch they’d shared since they’d first stood at this spot and said goodbye to their child. If Sophia had survived her birth, today would have been her second birthday.

Returning the squeeze of Yannis’s fingers, she then gently tugged her hand from his and hugged her arms around herself. ‘How have you been?’

His head rocked forward. ‘Good. You?’

Conversation had once flowed so easily between them.

But that had been a long time ago.

She took a step back. ‘I should get back to my boat.’

Her fingers tightened on her biceps. ‘I don’t think that’s a good idea.’

‘There are things I want to talk to you about.’

‘Do it through our lawyers.’ Like they had done since she’d left him.

‘Not everything can go through them.’ He rammed his hands into his trousers and rolled his shoulders. ‘Stay for a drink. Share lunch with me. Let us talk. And then I’ll sign the papers.’

She turned her face sharply back to him. Keren had been waiting for three months for Yannis to sign the papers that would finalise their divorce and cast in iron the financial settlement.

‘You have them here?’ she asked.

‘Locked in my safe.’

Could it really be that easy? One conversation and then they would finally be officially over?

Either the solemnity of the day had softened him or he’d got bored with toying with her.

In the eighteen months since she’d left him, all the magnanimous generosity Yannis had initially declared he wanted to lavish her with had been stripped away to the bare bones.

She’d accepted his initial settlement offer without countering it only for him to change his mind and halve it. And then halve it again. And again.

The chateau in Provence and the town house in Milan, the Aston Martin, the Maserati...all had been dangled before her then snatched away.

Now all that was left was a fraction of his initial settlement offer and she wouldn’t care if he revoked that too.

She hadn’t fought back. Not on any of it. Not even when her lawyer had begged, telling her she was settling for a fraction of what she was entitled to by law.

Keren didn’t want to fight. She didn’t care if Yannis got the satisfaction of believing he’d won. She didn’t care what the law said. They’d been married only fourteen months. She wanted nothing from Yannis but the right to visit their daughter’s grave.

‘Okay. We can talk.’ She gazed at their daughter’s headstone. ‘But not today,’ she added softly. She would not fight on a day of mourning. Today was Sophia’s day.

Yannis either felt the same way or understood for he bowed his head and said, ‘Stay in the cove for the night and we’ll meet for breakfast on the poolside terrace.’

‘Do you have food on your boat or shall I have lunch and dinner brought to you?’

‘I have provisions. But thank you.’ Maybe he really had softened towards her. Maybe the conversation he wanted to have was a peace offering. Maybe he wanted to apologise...

A sad smile curved her lips. Yannis had never apologised for anything in his life.

He bowed his head again. ‘I’ll see you in the morning.’

Keren waited until he’d disappeared from view before returning to the cove.

Stranded with Her Greek Husband Playlist